Refined pasta is high in carbs, which can be bad for you when consumed in large amounts. It also contains gluten, a type of protein that causes issues for those who are gluten-sensitive.

On the other hand, pasta can provide some nutrients that are important to health.

This article looks at the evidence and determines whether pasta is good or bad for you.

What Is Pasta?
Pasta is a type of noodle that’s traditionally made from durum wheat, water or eggs. It is formed into different noodle shapes and then cooked in boiling water.

Nowadays, most products sold as pasta are made from common wheat. However, similar noodles can be made from other grains, such as rice, barley or buckwheat.

Some types of pasta are refined during processing, stripping the wheat kernel of the bran and germ, removing many of the nutrients.

Sometimes refined pasta is enriched, meaning it has some nutrients, such as B vitamins and iron, added back in.

Whole-grain pasta is also available, which contains all parts of the wheat kernel.

A few examples of commonly consumed types of pasta include:

SUMMARY
Pasta is made from durum wheat and water, though noodles can be made from other grains as well. Refined, enriched and whole-grain pastas are available.

Refined Pasta Is Most Commonly Consumed
Most people prefer refined pasta, meaning that the wheat kernel has been stripped of the germ and bran along with many of the nutrients it contains.

Refined pasta is higher in calories and lower in fiber. This may result in decreased feelings of fullness after you eat it, compared to eating high-fiber, whole-grain pasta.

However, other studies have found mixed results regarding the benefits of whole-grain pasta. A study including 16 participants found that there was no difference in blood sugar levels after eating refined pasta or whole-grain pasta.

Still, many studies have found that eating lots of refined carbs may have negative health effects.

For example, a study including 117,366 people found that high carb intake, especially from refined grains, was linked to an increased risk of heart disease.

However, more studies that focus specifically on the health effects of refined pasta are needed.

It should also be noted that the glycemic index of pasta is in the low to medium range, which is lower than that of many other processed foods.

SUMMARY
Refined pasta is the most popular type of pasta. Eating refined carbs has been associated with an increased risk of heart disease, high blood sugar and insulin resistance.

Nutrients in Whole-Grain Vs. Refined Pasta
Whole-grain pasta is typically high in fiber, manganese, selenium, copper and phosphorus, while refined, enriched pasta tends to be higher in iron and B vitamins.

Whole-grain pasta is also lower in calories and higher in fiber and certain micronutrients than refined pasta.

Fiber moves through the gastrointestinal tract undigested and helps promote fullness. For this reason, whole-grain pasta may be more effective than refined pasta in reducing appetite and cravings.

Pasta Is High in Carbs
Pasta is high in carbs, with a one-cup serving of cooked spaghetti containing between 37–43 grams, depending on whether it is refined or whole-grain.

Carbs are broken down quickly into glucose in the bloodstream, which results in a sharp rise in blood sugar. Refined pasta, in particular, is higher in carbs and lower in fiber than whole-grain pasta.

Additionally, simple carbs like refined pasta are digested very quickly, leading to increased hunger and a higher risk of overeating.

For this reason, those who have diabetes are advised to keep carb intake in moderation and eat plenty of fiber. Making these changes slows the absorption of sugar in the bloodstream and helps maintain steady blood sugar levels.

High-carb diets have also been linked to numerous health conditions, including:

Diabetes: Some studies have shown that high-carb diets may be associated with an increased risk of developing diabetes.
Metabolic syndrome: One study found that those who ate a high amount of carbs from starchy foods were over twice as likely to develop metabolic syndrome, a group of conditions that increase your risk of heart disease.
Obesity: Another study found that eating foods with a higher glycemic index, which is a measure of how quickly foods increase blood sugar, was tied to a higher body weight.
However, all these studies are observational, meaning they only show association.

Further research is needed to determine how much of a role carb intake may have on these conditions versus other factors.

SUMMARY
Pasta is high in carbs. High-carb diets can raise blood sugar levels and may be associated with an increased risk of diabetes, metabolic syndrome and obesity.

Gluten in Pasta May Cause Problems for Some People
While there are special gluten-free pasta varieties available, traditional pasta contains gluten.

Gluten is a type of protein found in wheat, barley and rye. For most people, gluten is well-tolerated and does not cause any problems.

However, for those who have celiac disease, eating foods with gluten can trigger an immune response and cause damage to the cells of the small intestine.

Some people may also be sensitive to gluten and may experience digestive issues as a result of eating gluten-containing foods.

These individuals should avoid eating pasta made from wheat to prevent negative symptoms. Instead, opt for gluten-free whole grains like brown rice or quinoa.

For those without celiac disease or a gluten sensitivity, the gluten found in pasta can safely be consumed without problems.

SUMMARY
Many types of pasta contain gluten, a type of protein that can cause adverse reactions in those with celiac disease or gluten sensitivity.

Is Whole-Grain Pasta a Better Option?
Whole grains are made from the entire wheat kernel. As a result, they’re higher in fiber, vitamins and minerals than refined grains, which contain only the endosperm of the wheat kernel.

Eating whole grains has been associated with a lower risk of heart disease, colorectal cancer, diabetes and obesity.

However, keep in mind that whole-grain pasta is made from whole-wheat flour that has been pulverized.

This process diminishes the beneficial effects of the whole grains found in pasta since grains with smaller particles are digested more rapidly, leading to greater increases in blood sugar.

Still, while there is little difference in the effects of refined and whole-grain pastas on health, pasta that is made from whole grains may be a better choice if you’re looking to lose weight. It is lower in calories and higher in satiety-boosting fiber than refined pasta.

Whole-grain pasta also contains a higher amount of most micronutrients, aside from B vitamins, which are added back into enriched pasta during processing.

SUMMARY
Whole-grain pasta is made from wheat flour that has been pulverized, diminishing most of the beneficial effects of the whole grains. However, pasta made from whole grains is lower in calories and carbs, as well as higher in fiber and most micronutrients.

How to Make Pasta Healthier
When eaten in moderation, pasta can be part of a healthy diet. Whole-grain pasta may be a better choice for many, as it is lower in calories and carbs but higher in fiber and nutrients.

However, in addition to the type of pasta you pick, what you top it with is just as important.

Calories can stack up fast when adding high-fat, high-calorie toppings like cream-based sauces and cheeses. If you are watching your weight, go for a drizzle of heart-healthy olive oil, some fresh herbs or a few of your favorite veggies instead.

You can also add your choice of protein to your pasta to turn it into a balanced meal.

For instance, fish and chicken can add some extra protein to keep you feeling full and satisfied, while broccoli, bell peppers or tomatoes can provide nutrients and additional fiber.

Here are a few other ideas for healthy pasta dishes:

SUMMARY
To optimize the nutritional value of your pasta dish, load up on toppings like proteins, heart-healthy fats and vegetables. Limit high-calorie sauces and cheeses.

The Bottom Line
Pasta is a dietary staple around the world and it does contain some important nutrients.

However, pasta is high in carbs. High-carb diets may raise blood sugar levels and have been associated with some negative effects on health.

For this reason, it’s important to keep portion sizes in check and pick healthy toppings for your pasta, such as vegetables, healthy fats and protein.

In the end, moderation is key when it comes to pasta.

While you can enjoy it on occasion, it’s important to pair it with other nutritious foods and make sure it is just one component of an overall healthy diet. 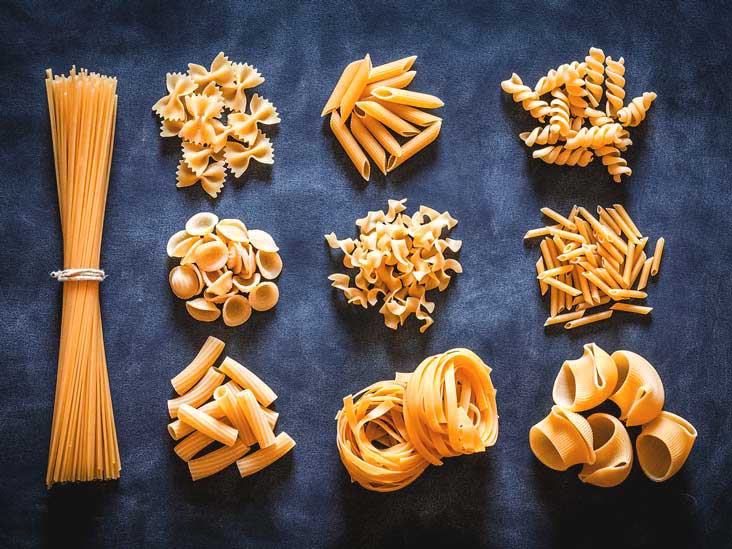 Growing vegetables at home: six of the best
No Comments
Why Does Every Kind of Yogurt Have Sugar?
No Comments
Top 10 Worst Foods For Diabetes
1 Comment
Eating This Gel Might Help You Lose Weight
No Comments